It was a normal weekday.

After school ended and I returned home, I found my little sister lost in thought. She was staring at the screen of her smartphone. When she replied to me, she never took her eyes off the screen, making me interested in what she was doing.

“It seems that Mom is working overtime today so she’ll be coming back late.”

“Really? Then what are we going to do about food. Is Dad home?”

Our father is a mangaka, and he currently has a weekly series that he draws. He usually does his work in a rented apartment, but he finds it easier to concentrate at home, so when he has a lot of work, he ends up drawing a lot in his room.

Most likely, today is one of those types of days. My mother said that it’s best not to bother him during times like this. However, what will we do about dinner? If Mom isn’t home then we could get stuff from the convenience store, go to a family restaurant, or…

“Wait, why are you wearing an apron?”

Yes, for some reason, my little sister is wearing an apron. It’s as if she was just about to start cooking.

However, my little sister is embarrassingly bad at cooking. She always manages to cook some amazingly disgusting dishes. While I’m thankful that she’s willing to cook, but I’d rather it be at the level where a human can actually eat it.

I kept my thoughts to myself as my sister opened her mouth.

“You should know your own skill when it comes to cooking. Don’t you remember the time when Dad was forced to take a sick leave because of your cooking?”

During that time, my father was forced to take a sick leave for 3 full days, and the series he was working on was forced to take a break for the first time. I thought that my sister would really reflect on things after that, but it seems that she didn’t learn a single thing.

After seeing that I was strongly against her actions, my sister spoke in a faint voice.

“You don’t how to cook yet, so for today, let’s go and buy something from the convenience store.”

I could only shake my head at my stubborn sister. When did she become so stubborn? When she was small, she always listened to me too. Her eyes had a stubborn look to them. Since I don’t see any way in trying to change her decision, I gave in to her stupidity.

“Test subject? There should be another away to put it…?”

While being amazed by what I said, my sister begins to take ingredients out of the fridge and starts cooking. If I watch her mysterious cooking, I might lose my appetite, so I move to the living room, lay down on the couch, and turn on the TV. Recently, because of my smartphone, I haven’t watched that much television, but it was still interesting.

People online say that streaming services like Youtube are more interesting, but I have to question that. Yes, Youtube is definitely interesting, but being able to watch variety shows on TV has it’s own appeal as well.

Dozens of people gather, tons of money is involved, and many celebrities from far away places gather just for one show. Of course a show like that would be interesting.

From the jokes, to the retorts, and all the editing that goes into it, all the interesting parts of the show are gathered into one TV show.

Though I talk about all the good points of TV, to be honest, I do watch a lot of Youtube as well. It’s convenient after all. I can watch it on my own time, whenever I want.

After getting lost in my thoughts, I heard my sister call out from the kitchen.

Having tamagoyaki for a meal is fine. Really, it is fine, but isn’t that a little bit too light? It would’ve been better with something that feels more like a meal, like meat or something. Well, it’s probably about morning somewhere in England right now so let’s just think of it like that.

As I try to interpret her mysterious thought process, my sister, nervous with slightly blushing cheeks, slowly placed the dish in front of me. She even prepared chopsticks for me.

Just looking at it, it was a properly made tamagoyaki. It’s not as well made as those sold in a store, but the tamagoyaki at least held its shape and didn’t look burned anywhere.

My sister’s food was not being burned was already a high praise for it. I take the chopsticks and slowly put the tamagoyaki into my mouth. At that moment, my senses flew out the window.

It’s because the tamagoyaki actually tasted good. No, most likely, it didn’t actually taste that good. It was only at the degree where, if a normal person made it, someone would say “It’s not bad”.

However, when I think that my little sister made it, it’s at the level where you might think a huge disaster is about to occur. For some reason, tears began to flow from my eyes.

Unconsciously, I let out those words.

Hearing that, my sister had an expression that showed that she was happy from deep within her heart as she drew closer to me. It’s been a long time since I’ve seen my sister like this.

I was also happy as I ended up giving her a pat on the head.

“U-umm, which one is better? The tamagoyaki that I made, or the one that your girlfriend makes?”

I didn’t think that my sister would ask me something like this. Why is she asking me this anyways?

I get a little embarrassed as I try to shake away from my sister’s gaze. After all, boasting about my girlfriend to my family is just a little bit embarrassing. However, my sister didn’t care about that, and continued on with the conversation.

“I did it, yay! It’s a good thing I practiced all the time…”

It seems that she’s so happy that she does a quick pump with her arms. Well, I guess that’s fine for now.

After that, I guess since she was so happy after hearing that it tasted good, my sister made a ton more tamagoyaki. More than she could eat herself. I mean, you don’t really need to make that much…

Also, I got pretty tired of the flavor as well…

For those of you that don’t know what tamagoyaki is, it looks like this: 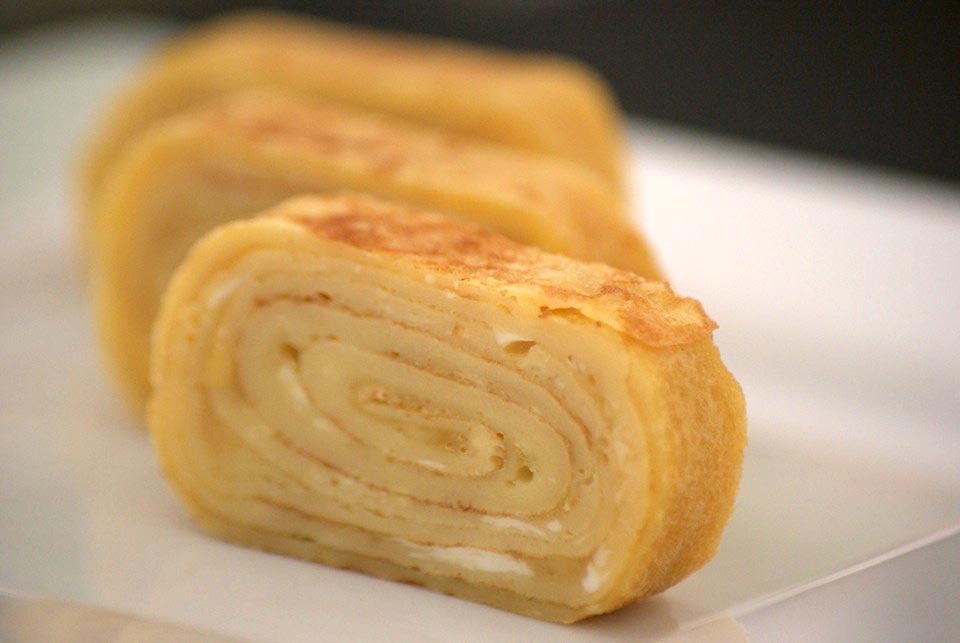 It’s made by folding layers and layers of egg on top of each other to get a solid block. There’s actually a special pan for making it.

This site uses Akismet to reduce spam. Learn how your comment data is processed.