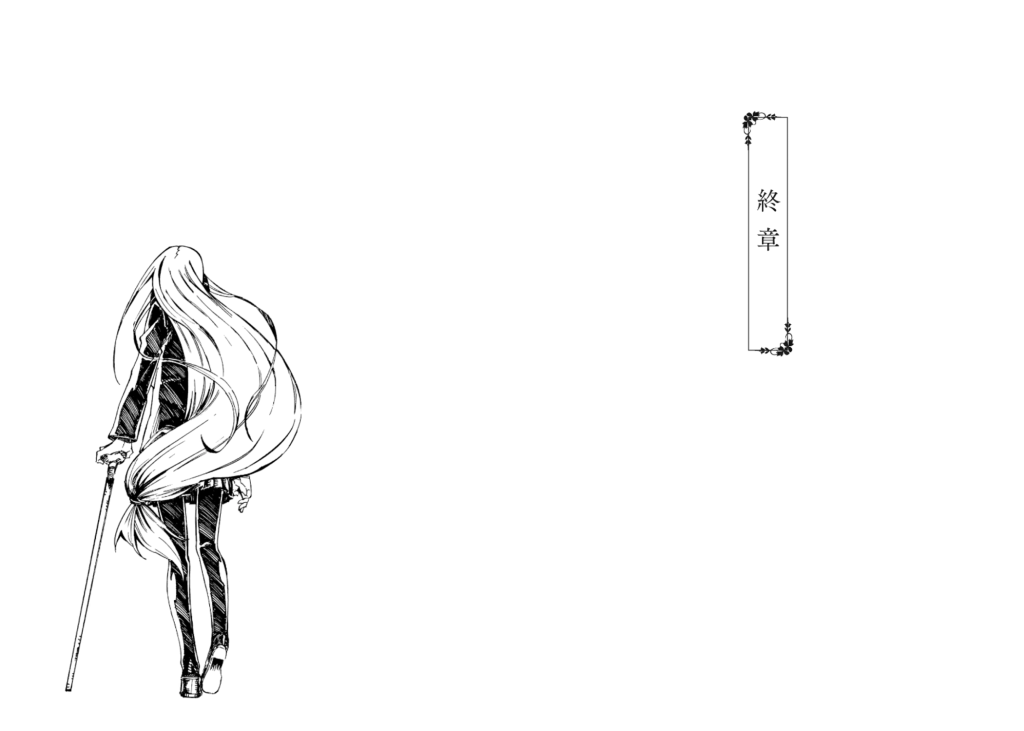 —Thus, the world was rebuilt.

The young man that was a hero, and the girl that was his fiancé, could be said to have entered an infinite hell, as they took a step into their long long journey.

How it would end, no one knew.

Even the goddess who had set up the game did not know.

The girl that was his fiancé, accepted the fate that she had chosen herself, as she continued to protect the world alone, by sacrificing her body.

The young man that was a hero, changed into many different forms and reunited with his fiancé. However, the girl would always fall ill and with no way of seeing her through, he would always lament.

The number of stories that they had created together, had finally reached just over ten thousand.

From now on, what kinds of stories will the two of them create?

Will the two of them ever be able to live a peaceful and ordinary life.

Everything was left to fate and left alone.

After all, even the goddess couldn’t see through to the end of this story.

Everyone, please have a look—

March had ended and spring was at its height. It was a new year, and a new school year. They were in Murakumo Private High School third year class A’s classroom. Kirishima Yuuki was talking about the dream that he had last night.

“Man. It was such a long story.” Leaning towards the wall by the window, Yuuki crossed his arms. “It was a long story, and a masterpiece. It was honestly an amazing scenario. I cried so much as I was sleeping. I never thought that it would end like that, and by the time I woke up, my pillow was completely wet. Have you ever had a dream like that, Koiwai-san? No way, right?”

“Hmm, I wonder.” The class representative, Koiwai Kurumi crossed her arms, “To me. I think it’s strange that a dream that you had over one night could be such a long story.”

“I mean the story that you said, was definitely really moving but… in reality, the dream that you talked is a lot like dramas and animes. It’s almost like the volume of the Taiga drama [1]. I really wonder if you can dream that up in one night.”

“Of course you can, right? It’s a dream after all. Anything can happen in dreams.”

“In my thoughts,” Kurumi pointed her index finger, “The dream that you just talked about, was not one of your dreams, but something else completely. That’s what I think.”

“In other words, it’s that. It’s that, a “cool setting” that you’ve been warming up from childhood, that kind of thing?”

“I mean, is that wrong? A princess-like goddess who protects the world alone, and you go help this girl through some huge plan of yours. Isn’t that a common story? It’s a common daydream, right? Yup yup, it is it is. Boys always daydream about such things.” Koku koku, Kurumi nods, satisfied with herself. “Still, it’s unexpected. Yuuki also daydreams about such fantasies. You are rich, the son to Kirishima Pharmaceuticals, and you have a brocon sister. If you think about it normally, that’s already some pretty high specs, right? From other people’s perspective, it’s already enough of a fantasy like setting.”

“Is having a brocon little sister really something you can count into having more status…?”

Somehow, it seems a misunderstanding was made.

Although he spoke, he wasn’t expecting to gain any empathy. Who could possibly empathize with him anyways? It was so hopeless, yet realistic—his dream where he had felt someone’s body temperature disappear within his hands, how could he convey it so that someone could understand?

Yuuki also accepted it. It was something you wouldn’t understand unless you experienced it. Sharing their feelings would be impossible just from listening to the story. Rather, he should be thanking her. She had listened until the end of his long ramblings about his dream.

“By the way, Yuuki-kun.” Kurumi gave off a smile. Then she struck out and pointed her finger at him. “You brought them again didn’t you.”

“The chocolate cigarettes. You brought them again.” She once against smiled. Then she yelled into his ears. “You liaaaaaaaaaaaaar!”

His eardrums felt like they would break. The rest of the people in the classroom turned to look at them, but quickly returned to their own conversations.

“Even if god looks past this, I can’t possibly let this go! Clearly coming from your body is the sweet smell of cacao and sugar!”

“Idiot. Your voice is too loud.” Flustered, he tried to cover Kurumi’s mouth. Bringing sweets into the school was strictly prohibited. “Please speak a little bit more quietly. Or else everyone will misunderstand.”

“Regardless of any of that,” She sounded angry, but at least she her voice was quieter, “It’s true though that you brought sweets though, right? Yuuki-kun, you’re a class representative right? If you do something like this, then you can’t really set an example for everyone else, right?”

“Well, that’s true but…” Yuuki tried to make an excuse. “Without it, my mouth feels somewhat lonely. It’s like I can’t seem to calm down.”

“Do you still feel like you want to smoke some tobacco?” Kurumi was shocked, “Didn’t you already quit during middle school? I kept telling you to stop after all.”

“Why did you repeat it again?” Yuuki glared at her, “Besides, it’s not tobacco but cigars, you know? The ones that I smoked that is. Don’t mistaken that, okay? It’s completely different after all.”

“They’re the same aren’t they?”

“It doesn’t maaattteeeerrrrrrrr!” She yelled again. The rest of the people in the classroom turned to look at them, but quickly returned to their own conversations. Kurumi was indignant, “Tobacco and cigars are the same thing, right!? The ingredients are all the same, right!? It’s like how udon and soumen are basically the same!? It’s no different from that!”

“… Isn’t there something wrong with saying that? You need to apologize to some people for that, you know?”

Hafuu~, she let out a breath.

“I’ve already told you this many times but, it’s not good for a high schooler to be smoking cigars. You aren’t some old uncle after all. You also aren’t some mafia boss after all.”

“No, I told you that I quit already.”

“If you still want to smoke, I can understand it. I get it because there are a lot of other people who do that as well, but, cigars, you know… I’ve going to keep saying it, but cigars…”

Hafuu~, she took another deep breath,

“Besides, Yuuki-kun. Do cigars taste good? Do you smoke because it’s tasty?”

“No. Cigars are disgusting.”

“That makes me even more frustrated! Why do you smoke it if it tastes bad!?” Kurumi held her head. Then with another, hafuuuu~, she took another breath. “Anyways. Since you already stopped smoking, stop it with the chocolate cigarettes as well. It seems so childish.”

“I was barely able to quit smoking cigars, so I don’t know about chocolate cigarettes. It feels like I almost can’t stop it.”

“Ugh! What’s with that!” Kurumi stamped her feet in frustration. “Are you a child! You are one! Do you need something like Linus’s blanket?! [2] Can you not go one without a pacifier!”

“Your voice is too loud.”

“Anyways, I,” Kurumi hit the table to emphasize her words. “As a student representative! As a friend that’s known you for a long time! I will make you quit! Prepare yourself!”

“Alright alright. I understand.” Anyways, he wanted to calm her down. In order to do that, he changed the topic. “More importantly, Koiwai-san, why are you so energetic.”

“Hmm? Did you not hear, Yuuki-kun?” Kurumi made a look of surprise. She returned to her normal voice, “I see. That’s why you’re normal. No wonder.”

What is she talking about? Before he was able to ask that, the door to the classroom opened. “Hey, everyone in their seats,” the homeroom teacher hit the board with the seating arrangement as she came in.

All the classmates quickly made their way back to their seats and sat down. The class didn’t change, but the classroom did. As such, the initial seating arrangement was in alphabetical order. Yuuki was at a seat by the window.

“Well then, homeroom is starting now. There hasn’t been much change, but I would like to ask for your best regards this year as well. It’s fine to be relaxed. It’s just that we have a new member to for the class.” She shrugged her shoulders and looked towards the hallway, “You guys already heard about it, right? I’ll introduce you guys to the new person. Heeey. Don’t hide and come in.”

Everyone in the class whispered to each other. They had a look of expectations and curiosity. It was an air that was hungry for new stimulus. When he looked towards Kurumi who was sitting in the back, she returned him a meaningful wink.

What is planning on starting?

While he was perplexed, the air changed. The classroom suddenly became quiet. It was like the moment you realize that what you were touching was really a world-class jewel instead of a marble like you thought it was. The current atmosphere was like that.

What is this feeling?

Yuuki also moved his eyes towards where his other classmates were looking. Then, he gulped. It was one moment. There was a jewel. It was beyond the open door of the classroom. There, the girl stood. She was like a frightened fairy looking out through a hole.

First, was her silver hair. Then, her red eyes. Her white porcelain skin harmonizing with her own beauty. And more than anything, the feeling that oozed out of her body was that of an otherworldly nature.

He thought that the homeroom teacher who was completely calm during this time, was a really amazing person. Or maybe, the years were eating away at her sense of aesthetics? Standing next to such an existence, does that really not make you feel anything? Is it okay for such a thing to be possible? It was clear that in the eyes of everyone in the classroom, the appearance of the girl seemed like some sort of goddess.

“Anyways, this is the transfer student.” The homeroom teacher didn’t change her tension as she spoke. In fact, her face seemed a little sleepy. “Well then. You, give your introduction.”

“Y-yes.” After replying, the jewel gave a nod. That voice did not betray the visual impression at all. It was a beautiful voice, like a ringing bell. “K-k-kanaruzawa Sekai. Please take care of me…!”

It was most likely said with ever everything she had, and with an awkward smile. She had made such a simple self-introduction, that it scattered the splendor of the still stunned classroom.

Between a goddess and a human…

Or between a hero and his lover…

A romantic comedy that no one can complain about.

In this chapter and beyond, the author changes the way first names are written in the story. The first volume had names written in Katakana, which means they were written out with syllables and each character had no individual meaning. From now on, the character names for Kurumi, Yuuki, Sekai, and Haruko, are all written in Kanji, or some might say Chinese characters, which means each individual name has some sort of image to it. I’ll be giving them below with their English translated, Katakana, and the Kanji, and a short explanation of the Kanji:

The characters for Yuuki are excellent and tree.

The characters for Kurumi are coming and sea.

Unsurprisingly, the characters for Sekai when put together literally mean the world.

The characters for Haruko mean spring and child.

This site uses Akismet to reduce spam. Learn how your comment data is processed.